2018 has been a year of significant de-rating in multiples of several mid and small cap stocks. However, many businesses with strong moats have been able to avoid the fate of the rest of the market. In most of these cases, stock returns over the last few years have been even higher than the earnings growth. Valuation multiple expansion has been a big driver of returns for these stocks.

Continued multiple expansion has resulted in valuations of these companies reaching never before seen levels. Few arguments explaining this trend are that “entry valuations don’t matter for fast growing and high ROE/moat businesses” and that “quality is always expensive”. There are many examples supporting these arguments. For eg. Over the last 10 years, investment in stocks like Asian Paints and Page Industries would have yielded fantastic returns even when bought at high valuations.

At 2Point2 Capital, we believe that these arguments aren’t very solid and the data that is cited is prone to Survivorship Bias and Selection Bias.

Survivorship Bias or Survival Bias is the logical error of only focusing on the survivors and ignoring the failures when trying to understand the importance of a metric. In every decade, there will be many businesses which end up with a phenomenal operating performance. This performance can be driven by multiple factors like industry tailwinds favouring growth/profitability or market share gains due to superior execution. When seen in retrospect, these businesses would have proven to be good investments at almost any price.

However, in order to eliminate the survivorship bias, we must also include all those businesses which had similar potential but where the operating performance turned out to be disappointing. The weak performance could again have been driven by multiple factors like industry tailwinds turning into headwinds, adverse regulations or irrational competition destroying industry profitability. We have seen this play out in several stocks in the Pharma, Telecom and Infra space. These companies which at one point were growing rapidly with high ROEs have seen both growth and profits evaporate. Even strong moats proved to be an ineffective defence against changing industry, regulatory and competitive landscape. In these cases, the stock returns have been poor even when entry multiples were low but would have been particularly bad if the entry valuations had been high. When we adjust for survivorship bias, we find that for every Page Industries, there are few Bharti Airtels and for every HDFC Bank, there are few ICICI Banks. 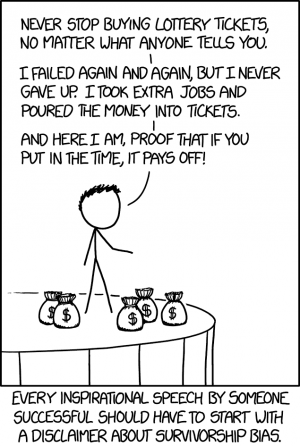 Selection Bias or Sampling Bias is the logical error due to a sampling methodology that results in an incomplete representation of the population. Survivorship bias is also a form of selection bias. Any retrospective analysis of appropriate entry valuations which has its end-point in 2017 or 2018 suffers from a selection bias as current valuations for the overall market are on the higher side and for high ROE/growth companies are close to all-time peaks. As such, most companies over the last decade have only seen an expansion in valuation multiples. This has resulted in the likes of even Hindustan Unilever and Nestle becoming multi-baggers despite reporting mediocre earnings growth.

Just as stocks go through periods of expanding multiples, they also go through periods of stagnant/declining multiples. Over the long term, only earnings growth (and not multiple expansion) is a sustainable driver of returns. If we consider an alternate scenario of declining valuations, many multi-baggers would have instead delivered poor returns.

The argument that “quality is always expensive” needs to have caveats. It is right to argue that good businesses deserve a higher valuation than mediocre businesses. However, this doesn’t mean that the fundamentals of intrinsic business valuation stop applying for good businesses. Intrinsic value of even good businesses is nothing but the value of the stream of future cash flows.

As can be seen from the above table, when the entry valuation is high, even a long period of high growth is not enough to deliver good stock returns. There are very few businesses that can sustain growth rates of 20%+ for long periods and especially on a high base (We recommend reading Michael Mauboussin’s The Base Rate Book for more context on how growth rates decline as businesses’ become larger). And even when they do, extraordinary earnings growth still only lead to ordinary stock returns. For eg. Wipro has delivered ZERO returns (including dividends) over the last 19 years despite an earnings CAGR of 20%+ in this period. This was because at the peak of the dotcom bubble Wipro stock was trading at a P/E of 800x! Even at a P/E of 80x, Wipro investors would have made less than 13% return CAGR.

It is important to be sensitive to the price paid even when investing in good businesses,. We should seek to invest at a discount to intrinsic value which is based on a conservative forecast of future cash flows. This will ensure that we don’t lose a lot of money when future business performance isn’t as good as expected. On the other hand, buying good businesses at very high prices will often lead to low returns when earnings growth merely shift from spectacular to good and when valuation multiples eventually contract.

“No matter how wonderful [a business] is, it’s not worth an infinite price. We have to have a price that makes sense and gives a margin of safety considering the normal vicissitudes of life.”