Crazy Eddie’s business continued to grow rapidly as consumers found great deals on electronics products in their stores. The company launched an ad blitz which is still well remembered for its loud tagline – “Crazy Eddie, his prices are IN-S-A-A-A-N-E”. For a while, Crazy Eddie had a higher brand recall than even Coca Cola in New York! 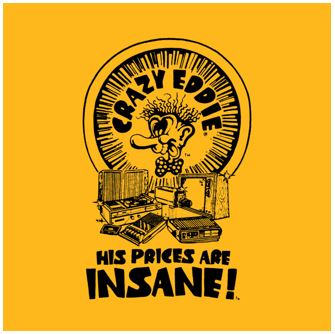 While consumers loved Crazy Eddie, they didn’t know the source of its deep discounts. Crazy Eddie’s competitive advantage was Fraud. Right from its inception, Crazy Eddie was indulging in multiple fraudulent tactics which allowed it to sell products at deep discounts and yet make a profit for its owners. Some of these tactics were:

Eddie Antar deposited the ill-gotten gains from these tactics into Israeli bank accounts. The scale of Crazy Eddie’s fraud was still quite small and primarily limited to tax evasion. Like any ambitious fraudster, Eddie Antar was not satisfied and decided to “make it large” by going public with an IPO. Over the 1980-84 period, Crazy Eddie gradually reduced the skimming to show high revenue and profit growth. The IPO was a huge success as investors and analysts lapped up a widely loved electronics retailer that was also showing extraordinarily high revenue/profit growth.

Over the next few years, Crazy Eddie begun inflating its sales by bringing back the laundered money stored in Israeli accounts. The money came back into the company as fake revenues through bank accounts in Panama. This was the Panama Pump. Even when actual sales were weak, the company kept reporting high same store sales growth. Inflating earnings and selling stock at a high price was believed to be a more profitable strategy than mere tax evasion. Crazy Eddie’s fiction was aided by the incompetence of the auditors who kept on signing off the financial statements despite several red flags. The Panama Pump worked very well. In two years, Crazy Eddie’s stock went up 10x to 80 $ from the IPO price of 8 $. The Antar family sold as much as 90 million $ of stock in this period.

In late 1986, Crazy Eddie’s stock tanked as earnings began to disappoint. The fraud had become unsustainable. A turnaround specialist soon acquired the company in a hostile takeover (he thought Crazy Eddie was undervalued!). Within a few weeks of the takeover, the new owners uncovered the entire scale of the fraud. Crazy Eddie filed for bankruptcy in 1989.  Eddie Antar was eventually arrested and received 8 years imprisonment.

Why this long history of Crazy Eddie and the Panama Pump?

A large number of Indian companies resemble Crazy Eddie and routinely employ the Panama Pump to defraud shareholders. Many of these companies have no competitive advantage and generate profits for the owners primarily through tax evasion and other financial shenanigans. For long periods, these companies do not show any meaningful profits. However, in bull markets, these companies suddenly start reporting an improvement in operating performance. Growth comes back and margins expand. What earlier seemed like a dead business suddenly finds its mojo.

The turnaround in financial fortunes is typically accompanied by a clever narrative explaining the change in fortunes. Sell-side analysts come up with detailed initiating coverage reports with high target prices. In bull markets, these narratives and target prices are easily bought by investors hunting for the next multi-bagger. Frauds thrive in an environment where there is a willing suspension of disbelief. Once the pump is complete, margins revert back to normal levels or even lower depending upon the level of “skimming”.

The Panama Pump is often seen in play in companies going public. Companies start growing rapidly along with profit margin expansion just a few quarters before the IPO. The IPOs tend to be heavily subscribed. A few quarters down the line the same companies start struggling and come up with new excuses to explain their inability to sustain their stellar pre-IPO performance. Many of the value-destructive IPOs of the last few years have followed a similar script.

The above company which operates in an unattractive industry has been listed for several years in the public markets. Till FY13, its operating performance had been sub-par with single digit EBITDA margins and low ROEs. However, when the bull market started roaring in FY14, the company saw a big jump in its profitability. EBITDA margins expanded from 6% in FY13 to 20% in FY16. When asked whether these margins were sustainable, management gave guidance that 20% margins were the “new normal” and could possibly increase further.

As investors bought into the turnaround narrative of the company, the stock price jumped by 20x in 18 months. However, the euphoria was short-lived. As the bull market in mid/small caps stared fizzling out, so did the company’s operating performance. By FY18, EBITDA margins were back to single digits. In FY19, earnings fell another 50%. The stock has lost more than 85% of its value in the last 2 years.

We believe that the Panama Pump is used in India by big and small companies alike. It is often driven by the need to show good numbers ahead of events such as a fundraise (QIP), strategic sale, impending secondary sale by promoters, avoiding margin calls on pledged shares etc. What often starts as a temporary quick-fix, often ends up becoming a habit.

Investors should be careful when investing in companies with a poor historical track record which suddenly start reporting good numbers. While occasionally there may be genuine reasons of a turnaround in a company’s fortunes (e.g. Graphite stocks), very often it’s just another Crazy Eddie.

[1] https://whitecollarfraud.com/crazy-eddie/. This website maintained by Sam Antar (Eddie Antar’s cousin, CFO of Crazy Eddie and one of the masterminds of the fraud) is our main source of information on Crazy Eddie. Sam had confessed to his role in the fraud and turned a government witness in exchange for leniency. Today, Sam works as a forensic accountant and advises law enforcement agencies about white-collar crime.