Bernie Madoff was the king of Wall Street. He had served as the Chairman of Nasdaq, the world’s second largest stock exchange (by market capitalization of shares traded). He was a prominent philanthropist serving on the boards of non-profits and donated millions to various charitable causes. He also happened to be the mastermind behind the world’s largest Ponzi scheme estimated at 65 billion $s. For his role in this scam, Bernie Madoff was sentenced to 150 years of prison.

On the other hand, Harry Markopolos was an unknown quantitative analyst whose job was to analyse investment products for his firm. Markopolos was asked to evaluate Madoff’s investment strategy. When he looked at Madoff’s strategy and the returns generated, he knew within five minutes that the numbers didn’t add up. The strategy consistently generated high positive returns with very few down months which was statistically improbable. Within another four hours of mathematical modelling, he had proof that Madoff was a complete fraud[1]. For example, he found that for Madoff’s strategy to work, he would have to buy more options than the total volumes that existed on the exchange. This was in 1999.

Markopolos spent the next 9 years writing memos and making presentations to the US SEC detailing the fraud being perpetrated by Madoff. He wrote these memos in 2000, 2001, 2005, 2007 and 2008. His 2005 memo was titled, “The World’s Largest Hedge Fund is a Fraud”. Despite the provocative title, no one would listen. Madoff’s Ponzi scheme kept growing larger and larger over this period. It finally collapsed in 2008 as a result of the global financial crisis and not because of the efforts of Markopolos. As clients lost money elsewhere, they started withdrawing their capital from the Madoff funds which had continued to report profits. The growing redemptions eventually led to the collapse of the Ponzi scheme.

The fall of Madoff shone the limelight on Markopolos who had spent almost a decade trying but failing to get the SEC to investigate Madoff and end the fraud. He wrote a best-selling memoir, ‘No One Would Listen’, of his pursuit of the biggest financial criminal in history (the book is a must read). Markopolos was repeatedly asked about his “secret sauce”. How had an unknown quant been able to identify Madoff as a fraud while the SEC and investors with billions invested couldn’t? In response, Markopolos wrote a short article on how anyone could spot a fraud (reproduced in full below[2]). 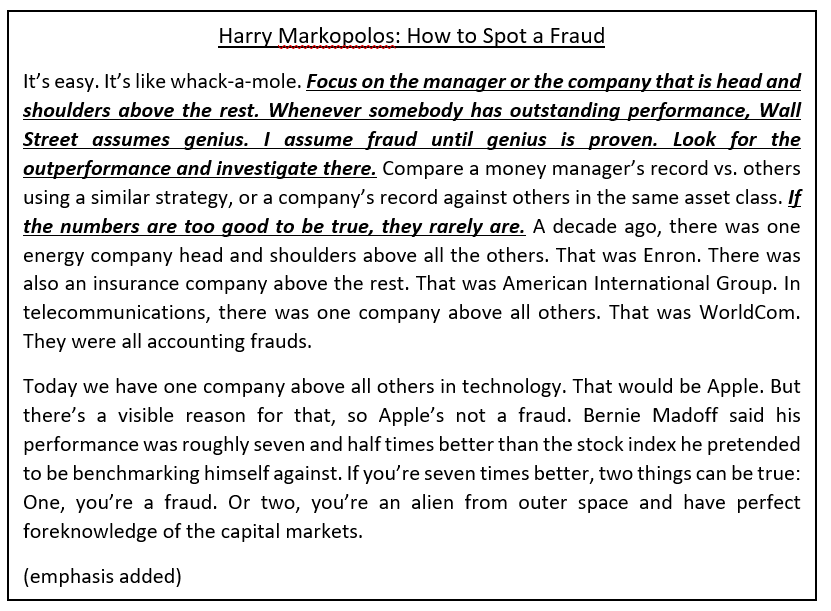 We call this ‘The Markopolos Method’. The Markopolos Method to identify frauds is simple: assume fraud until genius is proven. Markopolos reckoned that a fraudster (be it an individual or a company) needs to lie and/or exaggerate to attract attention. An investor/company claiming to generate 10% returns with low risk is unlikely to find an audience, but one promising to double the money in 6 months is likely to attract significant eyeballs. People often fall in love with such fraudsters as they attribute the extraordinary but fake performance to the work of a genius. Bernie Madoff, Jeff Skilling (Enron), Elizabeth Holmes (Theranos) and Lance Armstrong are examples of people whose genius was entirely based on fraud.

Markopolos doesn’t suggest that every extraordinary performance is fraudulent. For example, Apple reports unheard of profitability in the smartphone industry where every other player struggles. However, the evidence of its success is clearly visible when people line up to pay 1000 $s+ for a new iPhone while other companies struggle to sell their products at half the price. As per Markopolos, extraordinary performance should be supported by extraordinary evidence. It is a cause for concern only when the evidence is lacking.

Whenever companies report extraordinary performance, the first step for an investor should be to dig deeper to understand the source of the performance. The market often trusts such extraordinary performance to be driven by some special capabilities (often articulated by the management) without any independent verification. A higher degree of scepticism will minimize the likelihood of us falling victim to frauds masquerading as genius. We discuss below a few case studies of companies from the Indian market that were reporting exceptional performance but had some serious red flags. Note: Names and Financials have been changed intentionally.

TexCo was a B2B textile company supplying to the likes of WalMart, Jockey and Toys ‘R’ Us with 30%+ EBITDA margins and 70%+ pre-tax ROCE. TexCo’s profitability was even higher than that of B2C apparel companies like Page Industries which have strong brands and pricing power. TexCo’s reported financials suggested that it might be one of the world’s most efficient and profitable textile companies.

However, a deep dive into the audited financial statements and annual reports threw up multiple red flags related to revenue recognition, cash/forex position and unlisted/undisclosed related parties. While TexCo had claimed that it would continue to grow rapidly while maintaining margins, subsequent performance has been disappointing with margins shrinking and balance sheet deteriorating. As a result, the stock has fallen ~85% from its peak.

In a difficult business environment for the jewellery industry, JewelCo was growing faster than Titan with better margins. This despite having a substantially weaker brand in the organized jewellery space. The stock went up 14x in a 4-year period as investors bought into the “next-Titan” pitch.

In the euphoria of JewelCo’s stock appreciation, the red flags were ignored. JewelCo was reporting a 4x employee productivity vs Titan in the retail segment which is “too good to be true” given the similar business models of both the companies. JewelCo was also reporting high ROCE (>30%) in the commodity B2B jewellery exports segment. This business had a 9-month receivable cycle and a large chunk of these receivables has now been written off or are stuck. The stock is down ~95% from its peak and the debt has been downgraded to ‘Default’.

BevCo was rapidly gaining market share despite competition from incumbents like Coca-Cola, Pepsi and Parle Agro. BevCo’s edge was believed to be its Tier-2/Tier-3 focus and low price-points. Over FY12-FY16, BevCo reported a Revenue and PAT CAGR of more than 60%. Exceptional financial performance led to the stock going up 3x from its IPO price. BevCo stock was actively marketed as India’s only listed beverage company.

While BevCo claimed to have a high and rising market share, there was little on-ground evidence of its sales. BevCo’s products couldn’t be found in retail shelves and very few consumers had heard of the company let alone consume its products. None of the independent market research companies like Nielsen and Euromonitor attributed any significant market share to BevCo. This was a company that only existed in the stock market. BevCo’s stock price eventually collapsed as the full extent of its financial shenanigans were revealed in 2018/2019.

All the above companies and their managements were once labelled as “disruptive” and “visionary”. The Markopolos Method would have required us to study these companies in more detail to understand their “genius”. That deep dive might have helped us identify the red flags and possibly avoid them.

[2]Harry Markopolos: How to Spot a Fraud, Bloomberg Businessweek, https://www.bloomberg.com/news/articles/2011-09-22/harry-markopolos-how-to-spot-a-fraud