In Defence Of DCF

The discounted cash flow (DCF) method is one of the oldest methods of valuation used by mankind. The concept of compound interest that underlies DCF has been known for thousands of years as far back as the Babylonian civilization in Mesopotamia¹. Early uses of net present value for valuing cash flows can be found in Liber Abaci written by Leonardo of Pisa (more commonly known as Fibonacci) in 1202². While already widely used in the 1800s, the formula of the DCF method as we know it today was formally presented by John Burr Williams in his book, The Theory of Investment Value, in 1938.

Warren Buffett gave a simple summary of this formula in his 1992 Berkshire Hathaway shareholder letter – “The value of any stock, bond or business today is determined by the cash inflows and outflows – discounted at an appropriate interest rate – that can be expected to occur during the remaining life of the asset”.

Despite its long history, DCF has had its fair share of critics. The criticism has been the loudest when the markets are exuberant and when many stocks trade at exorbitant valuations that cannot be justified by DCF. Most of the criticism of DCF stems from its complexity and its sensitivity to assumptions.

A DCF valuation requires two critical inputs – a forecast of cash flows (in perpetuity) and a discount rate. Most analysts (including us) struggle with good business forecasts beyond a few years. To forecast cash flows over longer periods of time with a reasonable degree of accuracy is almost an impossible task. Estimating discount rate while not as difficult is still quite a task. The DCF’s sensitivity to assumptions means that it can be fairly unforgiving of any mistakes in estimating the inputs.

The above table shows how the DCF value can widely vary with a change in input assumptions. There can be a 9x difference in value if growth rate changes from 8% to 20% and discount rate from 14% to 10%. Even when the changes are smaller, the differences are quite large. This was referred to by Curtis Jensen as DCF’s Hubble Telescope problem – a slight change in assumptions results in the DCF value moving to a different galaxy.

If DCF is subject to so much volatility for minor changes in assumptions, then how can it be considered a useful valuation tool? What’s the defence of using such a complex and unreliable measure of value?

Our defence of the DCF is fairly straightforward and it goes like this.

The complexity and sensitivity of DCF is not a bug, it is a feature. It is not DCF that is hard and sensitive; valuing a business itself is hard and sensitive to assumptions. DCF is merely a reflection of this reality. DCF results in widely varying estimates of value because small changes in assumptions do have large effects on the intrinsic value of a business. If the DCF were any simpler or less sensitive, it would then not reflect the reality of how difficult it is to value a business.

Most of the value of a business lies far away in an uncertain and unpredictable future or what investors call Terminal Value. This is what makes valuing businesses difficult and sensitive to assumptions. The Hubble Telescope is an excellent analogy of how the difficulty of valuing a business increases, the further the cash flows are into the future. If a business has predictable cash flows, it is easy to calculate its intrinsic value. As the cash flows become more uncertain and further out into the future, it becomes difficult to come up with a reasonable estimate of intrinsic value. The range of potential outcomes is so wide that it is like looking at different galaxies of value. And this is true irrespective of which method we use to value businesses. The Hubble Telescope problem does not highlight DCF’s shortcomings, rather it highlights how difficult it is to value a business.

Alternative methods like valuations multiples (P/E, P/S, EV/EBITDA, etc.) have become popular because they seem easier and intuitive compared to the DCF. But it is important to remember that these metrics are just derivatives of the DCF model and not independent valuation methods. The underlying assumptions of a DCF model are explicit and transparent but those of other valuation multiples are implicit and hidden. But a model that has implied assumptions should still require the practitioner to have the same analytical rigor as when the assumptions are explicit. Sanjeev Prasad of Kotak Institutional Equities has a good take on this (below).

There is also a perception that some of these alternate methods are better than DCF because they are less sensitive to assumptions. This is largely due to the flawed way in which these methods are used and not due to some unique intrinsic quality. Given that these methods are just high-level variants of the DCF model, they should share DCF’s characteristics of complexity and sensitivity to assumptions. For eg, it is common to see analyst reports which value the business at 20x P/E in the base case, at 25x in the optimistic scenario and at 15x in the pessimistic scenario. The analyst has simply reduced the range of outcomes into a narrow range of ± 25% from the base case. It would have been more accurate to have a P/E range of 6x, 20x and 60x for the different scenarios to represent how sensitive the business value is to assumptions. Alternative valuation methods seem to give a sense of comfort by narrowing the range of potential investment outcomes. But these do not reflect the real-world volatility in value. It seems many investors prefer using such heuristics because it is convenient rather than because it is correct.

Over the last decade, another criticism that is levelled against DCF by the likes of Chamath has gained strength. These critics argue that the ultra-low interest rates across the globe have made DCF obsolete. Their view is that DCF only gives meaningful results in high-interest rate scenarios and when valuing predictable low-growth businesses (like REITs, annuities, etc). And that the DCF model breaks down in low-interest rate regimes and when valuing high-growth businesses.

We find this criticism absurd. There is nothing that prevents a practitioner from considering low interest rates and high growth as inputs if those are believed to be reasonable in their view. DCF is not emotional about the input assumptions. If such inputs are not being considered then that reflects the practitioner’s lack of imagination rather than DCF’s flaw. At the risk of repeating ourselves, this criticism again seems to be based on pinning the blame for the difficulty in valuing businesses onto DCF. Valuing high-growth businesses is hard irrespective of which valuation method is used. And this becomes even more difficult in periods of low-interest rates4. None of the other valuation methods provide any solution for these difficulties but because DCF makes these difficulties explicit, it is considered the culprit.

It is true that most practitioners find it daunting to build a robust DCF valuation model (we do too but we don’t blame DCF for it). However, there are ways that we can use DCF that are simpler and that would still aid the investment process. An approach that we like at 2Point2 and frequently use in our investment process is the Reverse DCF. John Williams had briefly discussed it in The Theory of Investment Value. 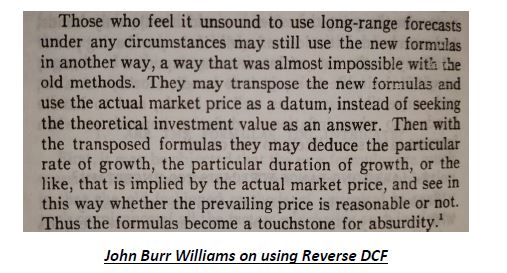 Keeping the other assumptions constant, we get the implied 20-year EPS CAGR as shown above. For Asian Paints to have an intrinsic worth of 40 bn $s, it would need to deliver 20% EPS CAGR(!!) for the next 20 years. We can analyse whether this is a reasonable expectation or an improbable one (For comparison – Asian Paints EPS CAGR over the last 10 and 20 years was just 14.1% and 18.5% respectively). Based on such analysis, we can then conclude whether the current stock price undervalues or overvalues Asian Paints.

The value of a business is the cash flows that it will generate over its lifetime discounted at an appropriate rate. This is a first principle way of thinking of intrinsic value and should not really be controversial. It is the closest thing to a fundamental law of valuation. The DCF method is merely a mathematical representation of this law. The DCF captures the intrinsic value of a business in its purest form. But this does not mean that practitioners shouldn’t use alternate tools which are close approximations of the DCF. John Williams would also have been supportive of this. His quote from The Theory of Investment Value (in a slightly different context) – “Any other function that lends itself to convenient mathematical treatment may be used, so long as the general premise that stocks derive their value from their future dividends is adhered to.” However, just because we are using alternate tools, we shouldn’t believe that they eliminate the complexity and sensitivity of the DCF model. Because these are fundamental traits of valuing a business and not of DCF per se.

1 Discounted Cash Flow in Historical Perspective, R.H. Parker
2 The Development of the Net Present Value (NPV) Rule – Religious Prohibitions and Its Evolution, Stefan Behringer
3 Keeping other assumptions constant –perpetual ROE of 20% and terminal growth rate of 5% after 20 years
4 As a thought experiment, try to calculate the value of a profitable business if low interest rates have made the cost of capital of the business permanently 0. Hint: “To infinity and beyond!”