Luck Vs Skill – Once Again 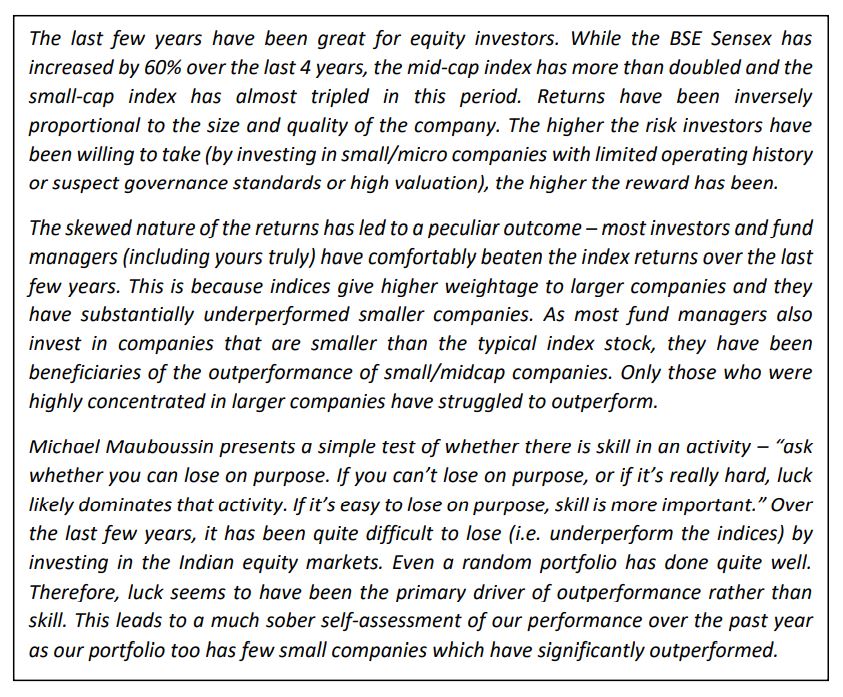 As we enter the year 2022, we feel a sense of deja vu. Post the Covid crash, small and midcap stocks have had an incredible rally and massively outperformed the large cap stocks. Even over a 3-year period starting January 2019, small and midcaps have outperformed large caps. The post-Covid outperformance of mid/small caps increases as we go down the market cap curve. The smaller the company, the higher the returns. The below table shows the average returns based on the market cap ranking.

The initial outperformance of small and midcap stocks after the Covid crash was understandable as these stocks had been crushed in the preceding years and their relative valuation vs large caps was attractive. But this outperformance has continued in CY2021. In many parts of the market, small and midcaps now trade at a valuation premium to their large cap peers. This despite being substantially inferior in terms of market positioning, cash flow and balance sheet quality, and governance standards.

It hasn’t mattered whether investors followed a good process and worked hard to find good investment ideas. Even those who didn’t, have done quite well. Presence or lack of investing skill has not mattered much. If you disregarded basic investing principles and invested in what appear to be the worst possible investment ideas (bad or non-existent business, weak balance sheet, unethical promoters, high valuations), you still probably did fine. The market has rewarded all sorts of businesses – good, bad or ugly.

The below chart shows the CY21 returns distribution of a 1000 RANDOMLY constructed 10-stock equal-weight portfolios. The stocks were randomly selected from the top-500 companies by market cap at the start of CY21.

This random stock selection simulation shows that more than 90% (!!!) of the randomly constructed portfolios have outperformed Nifty 50 in CY21. Only 9 out of 1000 had returns below 10% and only 2 had negative returns. It was incredibly hard to lose money last year. While the average random portfolio was up 51%, there were 26 portfolios which returned more than 100%. Repeating the simulation with different sets of random portfolios still yields similar results. If stocks are randomly selected from the top-1000 listed stocks by market cap, instead of the top-500, the returns are even higher with average return of 70% and with 96% outperforming Nifty 50. In this instance, 16 portfolios had greater than 300% return (something to do with a Brightcom or a Tata Teleservices).

The large outperformance of random portfolios suggests that most of CY21 returns were driven by luck; skill had a minor role to play. It has been reported that ~75% of Indian mutual funds outperformed their benchmark last year. This has been referred to as a comeback of sorts for active management after underperforming for a long stretch. Unfortunately, the data suggests this outperformance is largely driven by higher allocation of MFs to smaller companies vs the benchmark. While majority of MFs have outperformed the benchmark, their performance against the average random portfolio is not so stellar. This has been true for the 2Point2 Long Term Value Fund as well. Randomness >> Active Management in CY21.

The effects of random portfolios doing well can be clearly seen in the bullish euphoria on social media. Post-Covid, millions of new investors have entered the market and have done well. Large number of these investors seem to believe that their superior skills at identifying new trends and unknown companies has been the key contributor to their returns. Few of them are likely to acknowledge the role of dumb luck.

In such periods, it’s important for investors to remember what happened after a similar period in 2017. In 2018 and 2019, small and midcap stocks tanked. Especially those stocks with weak fundamentals and questionable governance. As only a few large companies drove the market up in this period, fund managers investing in small and midcap stocks saw themselves lagging the benchmark indices. The tailwind of good luck had turned into the headwind of bad luck. Random portfolios were no longer reporting market-beating returns. As the luck evened out, skill became more important and only few fund managers could report good longer-term returns.

In equity investing, luck plays a large role. It is the dominant factor that determines returns in the short-term. In any activity where luck is meaningfully involved, it makes little sense to look at short term performance. The only way to minimize the role of luck in evaluating an investor’s performance is to increase the sample size i.e. look at longer term performance. As the time-frame increases, the role of luck diminishes and skill starts becoming a more important contributor. Those celebrating their 2021 wins on social media should keep this in mind lest their performance in 2022 and 2023 end up like 2018 and 2019.