Last month, the RBI announced a new regulatory framework for microfinance (MFI) loans1 . In this note, we discuss how these regulatory changes impact the microfinance sector in India.

The new framework removes several restrictions that existed for NBFC-MFIs and creates a level-playing field for all types of MFI lenders (Banks, Small Finance Banks, NBFCs and NBFC-MFIs). These changes could lead to a structural increase in ROEs for NBFC-MFIs and open up new avenues for growth.

The ‘for-profit’ microfinance industry in India started in 1996 with the founding of BASIX by Vijay Mahajan. Prior to that, microfinance was largely driven by NGOs working with NABARD’s Self-Help Group (SHG) Bank Linkage program. Many of the first ‘for-profit’ MFIs were earlier NGOs or Charitable Trusts. The founders of these MFIs believed that being ‘for-profit’ would be a better route to providing credit to the poor as it would allow them to raise debt and equity on commercial terms.

Over the next decade, ‘for-profit’ MFIs grew rapidly. MFIs accounted for loans outstanding of 18,344 crs in FY10 vs 468 crs in FY05 (a 100%+ CAGR)2 . The industry had its seminal moment when SKS Microfinance – India’s largest MFI – went public in 2010 and listed with a market cap of over US$ 1.5 bn. Many other MFIs which had rapidly scaled were set to go public. At the same time, many NGOs were shedding their non-profit avatars and transitioning into ‘for-profit’ MFIs.

The MFI 1.0 party came to a grinding halt in late 2010 when the Andhra Pradesh MFI crisis unfolded. In response to complaints of usurious interest rates and coercive practices by MFIs (leading to borrower suicides), the AP government passed the AP MFI Bill which practically put a halt to all MFI activities in the state. AP was the largest state for MFIs with a loan portfolio of over 5,000 crs. The MFI Bill led to mass defaults in AP with NPAs of over 95%. Many leading MFIs (Spandana, Share, Asmitha) which had a large AP exposure became insolvent. SKS survived because of a lower AP exposure and the cushion of the capital it raised in the IPO.

Non-AP focused MFIs too struggled as debt and equity funding dried up for the entire sector. There were fears that other states would introduce similar restrictions as the AP government. The RBI stepped in and formed a sub-committee under the chairmanship of YH Malegam to look into the issues faced by the microfinance sector. The recommendations of the Malegam committee led to the creation of a new category of NBFC-MFIs and introduction of interest rate/margin caps. NBFC-MFIs could only lend at a maximum interest rate of 10% above their cost of funds3 and needed to have 90% of their assets in microfinance. There were also other restrictions in terms of loan amount and number of MFI lenders.

Initially, the Malegam committee recommendations were considered to be a death-knell for the ‘for-profit’ MFI industry. It took a couple of years for the MFIs that survived the AP crisis to adjust to the new regulatory regime. As margins were capped at 10%, it became important to reduce the operating and credit costs. Most of the larger MFIs began to geographically diversify to reduce the risk from any localised disturbances. By 2013, the industry had recovered and funding again returned for the well-run MFIs. Growth and profitability, while subdued compared to the Microfinance 1.0 era, was healthy. The stringent regulations instead of killing the industry seemed to have put it on a more sustainable growth path. By 2015, MFI loan outstanding had increased to 48,8824 crs.

RBI also began to recognize the importance of MFIs for its financial inclusion goals. Bandhan received the universal bank license in 2014 and 8 MFIs received the license to operate as Small Finance Banks (SFB) in 2015. These entities now had the advantage of raising low-cost deposits from the public rather than relying on funding from banks and other financial institutions. The transition from MFI to universal bank/SFB entailed large investments in people and infrastructure which negatively impacted their cost-to-income ratios.

The remaining NBFC-MFIs now had a regulatory disadvantage vs Banks/SFBs/NBFCs that undertook MFI lending (among other lending activities). While NBFC-MFIs still had to operate under stringent margin caps and limits on numbers of MFIs lending to same borrower, the other lenders had no such limitations. This posed a big problem for NBFC-MFIs which now accounted for less than 40% of the total outstanding MFI loans. Several Banks/SFBs/NBFC-MFIs proposed a common Code for Responsible Lending to ensure the smooth development of the MFI industry. However, the largest MFI player refused to agree to this code as it would impact its growth.

This period saw two large external shocks which impacted the MFI industry. Demonetization in 2016 led to a big increase in credit costs in some states. NBFCs were the worst affected as unlike Banks/SFBs they couldn’t accept demonetized currency. Covid was an even bigger shock. Lockdowns restricted movement of employees for collections and the long repayment moratorium announced by RBI affected credit discipline. Covid’s economic and health impact on the poor further hurt loan repayments. Some states saw a larger deterioration in credit quality due to overleveraging caused by aggressive MFI lending.

As interest rates declined after Covid, the average base rate of the five largest commercial banks fell below 8%. As a result, the maximum permissible lending rate for NBFC-MFIs fell below 22% (2.75x of average base rate) – the lowest rate ever. Many of the smaller NBFC-MFIs which had cost of funds above 12% were now operating below the 10% margin spread. This was a triple whammy as both operating and credit costs had increased due to Covid and now the margins were compressing due to falling interest rates.

The changing dynamics of the MFI industry seemed to have forced RBI to review its decade-old MFI regulations and led to the new regulatory framework announced in March 2022.

The key changes in the MFI regulations as per the RBI (Regulatory Framework of Microfinance Loans) Directions, 2022 are: 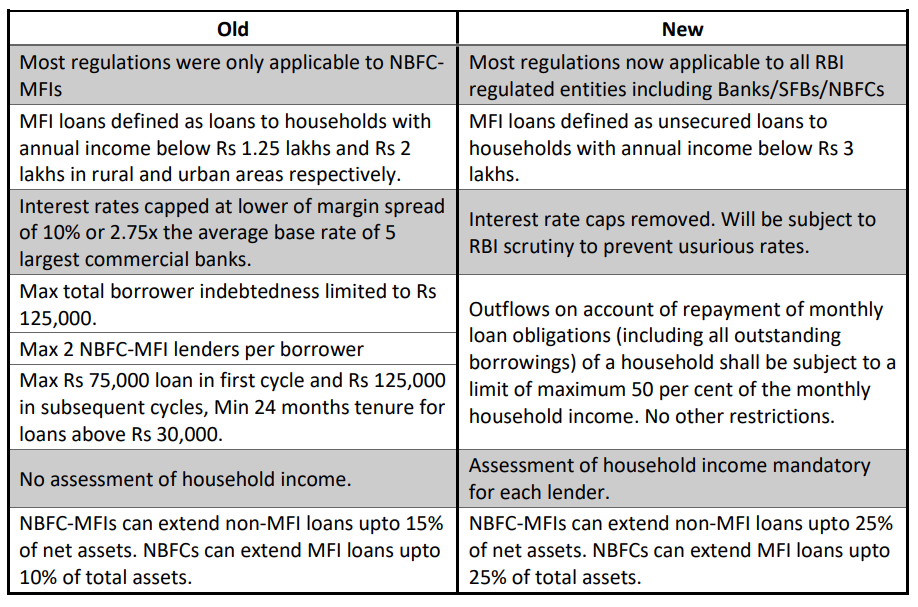 While Banks/SFBs/NBFCs are only marginally impacted by the new framework, for NBFC-MFIs it could be a game-changer. We expect these regulations to have an impact on 3 fronts.

Many observers are worried that NBFC-MFIs will misuse the pricing freedom to charge usurious rates. However, the NBFC-MFIs that transitioned into Banks/SFBs reduced their rates in their new avatars despite having the freedom to charge higher rates. RBI’s scrutiny and the fear of a political backlash is likely to ensure that any interest rate increase is reasonable and not excessive.

Overall, the new regulations are a shot in the arm for NBFC-MFIs which have struggled with multiple external factors impacting credit quality in the last few years. They are likely to be the driving force of the Microfinance 3.0 era.